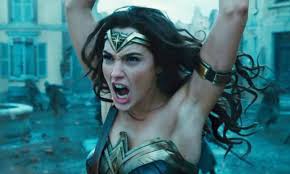 I was thrilled at the prospect of going to a superhero movie directed by a woman (Patty Jenkins) and with a woman (Wonder Woman/ Gal Gadot) at the center of its story.  Such movies have been making strides in the direction of no longer horrifying my sense of feminism – from Thor and Tony Stark’s dick measuring contest conducted by comparing their girlfriends’ professional and intellectual achievements (“…and the company that Pepper runs is the foremost tech conglomerate on Earth,” “There’s even talk of Jane getting a, um, a Nobel Prize”) to a male-female friendship based on mutual support and respect without the obligatory phase of manipulative sexual tension (see Captain America and Black Widow) –, but in the recent spate of Marvel and DC mega-movies, Wonder Woman is the first one with a $100 million plus budget and the first in over ten years to revolve entirely around a powerful female character, to give her a history, a coming out of ignorance and into herself.  Hallelujah.  A female as star of the show rather than as narrative prop to evolving but still highly self-involved male protagonists.

In some ways, Wonder Woman rose to the occasion.  After the obligatory franchise frame linking present day Wonder Woman to Bruce Wayne, the film opens with something between a male fantasy and a male nightmare as it pans over leather-clad women training on the paradise island of Themyscira.  Thanks in large part to its female director, the film suffers little from cringe worthy shots of these women as a series of sexualized parts.  It would be an exaggeration to say that there is no objectification happening at all, but gratuitous nudity is delivered in the shape of a less than embarrassed Steve Trevor (not that a naked Chris Pine elicits any complaints from me) and Gadot’s good looks are treated with a measure of self-awareness (if not by the character, at least by those around her).  The shooting itself might even make Laura Mulvey proud, for Wonder Woman is no mere object of scopophilic gaze.  The camera does not reduce her to a thing to be looked at by a man nor to a cipher for the quelling of male inadequacies.  She is here to do a job, that is, end all wars, and seems little aware of her effect on a room full of men or that people in the street might be staring.  Setting aside the question of whether Gadot and writer Allan Heinberg successfully combine naiveté with incredible intelligence and ability in the character of Diana Prince, this mixture creates a powerful image for all women: a woman who carries herself with unapologetic confidence, unafraid of what the world of men, its systems and its violence, might try to do to her.  In the realm of further positive symbols, the film delivers us: a woman repeatedly saving a man’s life, that man recognizing and supporting her superior capacities (best exhibited in four men lifting a door to aid an impressive, battle-ending leap by Wonder Woman), and a sexual relationship that pointedly does not try to sanction itself through allusions to an eventual marriage or happily-ever-after.  By featuring a woman who is rewarded instead of chastised for her curiosity and enjoyment of sex, Wonder Woman reminded me of Barbarella.  (Although, that such a big screen depiction of female sexuality should still appear revolutionary 49 years later is likely less than the best sign).

But the strides for feminism seem to end with this truncated sex scene precisely for the reasons most critics have cited as the collapse of the film in the last quarter of its run time.  Following modern comic-book movies’ need for definitive and outsized final fight scenes, thirty minutes of battling a poorly thought-through plot twist replaced the development of the central characters and their relationship.  One of the opening narratives describes the Amazons as at one time having kept men from making war, but how?  Wonder Woman largely acts like an action movie’s typical leading man.  She does not consult others, she believes herself to be the silver bullet (one deployed exclusively through violence), and with an ejaculation of power, defeats the final villain, temporarily albeit, ending the war.  This screen time would have served better had it been spent on building the characters, depicting intimacy or giving a plausible grounding to Wonder Woman’s doubts and ambivalent feelings.

My major gripe is with anyone who watches this movie and thinks our job is done.  I will not deny the incredible steps forward represented by and in Wonder Woman.  But the conversation cannot end there.  We need to ask where it falls short, when you can tell that this movie was still written by a man surrounded by male producers, and how it could have better defied its environment of crowd pleasing measures directed mostly at adolescent male tastes.  But then again, my expectations were very high for something that first and foremost was meant to be a better-than-tolerable summer blockbuster.  Perhaps I, like Wonder Woman, need to realize that the Ares influence that fostered our current conditions is not to be vanquished in one blow, even by a woman made to kill that god.

1 thought on “Wonder Woman Has Left Me Wondering”