Warning: This post contains extreme spoilers for the movie Atomic Blonde (which, let’s be honest, you weren’t seeing for the plot anyway). 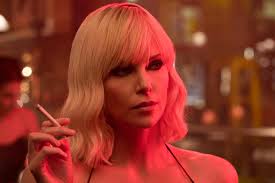 A friend of mine recently taught a short course called “Accusing Women,” which he was kind enough to ask me to TA.  The theme of the class was the recurring literary trope of Potiphar’s wife, the woman who falsely accuses biblical hero Joseph of raping her when in fact she is the villain who came on to him and, after being rebuffed, decides to make him pay for it. (Oh the guile of women!)

The result of this prevailing theme in literature is that women are fundamentally distrusted and that when they seek to have voice (read: assert themselves as subjects rather than wards, possessions or objects), they must be lying.  Doubly so if they’re accusing a man of wrongdoing.  Triply if the wrongdoing should malign that man.  The trope indicts not only women’s voices, but the evidence they present as well.  Potiphar’s wife (who of course has no name, though at some point — and not within the story as told in the Bible, the Koran or in Jubilees — acquires the name Zuleika) fabricates evidence as well, presenting the garment that she ripped off a fleeing Joseph as physical proof of his assault.  Moral of the story: don’t trust them bitches because they’ll even appeal to your faculties of reason to get you to condemn your bro.  In the end, my friend’s class meant to show the false accusation of women’s false accusations.  A nice set of lit crit Russian dolls to play with, eh?

What does all of this have to do with Atomic Blonde?  Atomic Blonde is a better than average action movie with a female hero who, aside from being a bombshell in absolutely amazing 80’s clothes, mostly acts like a combo of Jason Bourne (without the identity crisis) and James Bond (without the humor but with the vodka abuse).  Sadly, this means she falls short of my test for have you created an original female character or have you simply added a vagina to a male protagonist, but the movie is not entirely without the feminist redemption of provoking new thoughts and presenting new images.  (Principal among the latter being a seriously buff Theron emerging from an ice bath).

Prep spoiler.  We spend most of the movie thinking that British agent David Percival (James McAvoy) has “gone native” in Berlin and that loyal agent Lorraine Broughton (Charlize Theron) has been sent there to complete a mission and discover Satchel, a traitor to the British who’s been leaking information to the Russians (read: Cold War movie with typical seeming plot).  It’s obvious from her arrival that Broughton is being set up, and we discover fairly quickly that it’s Percival who’s behind it.  With every fresh set of acrobatically defeated Russian operatives, we renew our support for Broughton.  We root for our bad ass bitch the whole movie (in particular when she escapes a car armed only with a red stiletto) and slowly come to assume that Percival must be Satchel, trying to arrange things so that his countrywoman will take the fall.

But, turns out, all those scenes of Broughton’s taping a microphone to her body were not just an excuse to display flawless Theron in frankly fantastic lingerie.  Broughton is Satchel, and she records Percival (let it be known, he was doing the same to her) along with several other characters she encounters.  She then cuts these tapes together (a lovely scene of Theron in her underwear under blue neon lights) to make it sound like he was in league with the Russians all along.  Couple this with photographs left to her by a French lover (the entrancing Sofia Boutella), and our lady hero falsely accuses her male counterpart of being the traitor (that she is) and gets away with it.  We even side with her without the terrible, tacked-on second twist of her actually being a triple agent of the CIA.  (I didn’t need the US to justify her actions for me to continue to be on team Broughton).  To summarize: a woman falsely accuses a man by taking hard evidence out of context (the garment, I mean, the photographs) and manufacturing evidence so that his voice can, along with hers, testify to his treachery.  Has this trope progressed or has she simply become so clever as to best a bias that’s existed for over 2,000 years?  Has she gotten us to doubt the voices of men or plunged women even further into a well of suspicion?  I can’t answer this, but I can tell you one thing: if I could have helped her, I would have volunteered to be that wire.