I recently met a woman of my age who described a girlhood crush on Data, from Star Trek: The Next Generation.  (Cue theme credits.  Feel free to listen as we embark).  Leaving aside that this was a sentiment that made perfect sense to me (though I think I may be more of a Worf girl myself), her confession brought back countless hours sitting on my parents’ bedroom floor watching that show with my Dad.

Thinking of it now, it’s logical that my father should love this show.  It’s a rerendering of something he’d loved in the 1960s.  It had attractive women in tight onesies.  It boldly went where no one had gone before and showed technology that really did come to be.  (Seriously, my Dad still calls his cell phone his communicator).  The kicker may have been Jean Luc Picard.  An erudite and measured leader who steered his crew with an invested but circumspect attitude.  A respected older man…who was also a credibly attractive, non-macho heterosexual male with the same haircut conferred on my Dad in his early 30s by genes and fate.But, I think there was another reason he liked the show.  It was good.  It was literature, popular literature.  Yes, I mean this in the obnoxious, high-minded way.  It was a mix of this, clever marketing and some level of acquiescing to 1990s feel good standards (combined with acceptable, liberal subversions of the status quo) that made it the phenomenon that it was.  (It spawned three spin offs and several movies).  So, what makes Star Trek: The Next Generation good, engaging literature? 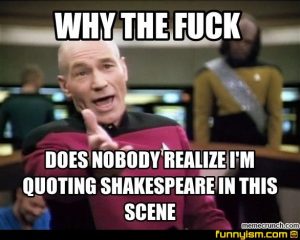 Each episode is an attentive short story, generally with a foolproof structure and an intelligent yet innovative mind to its literary forefathers. (Of course I’d like to be equal here.  Forefathers, foremothers.  But honestly, I’m talking about some old, dead, white men).  Generally, it doesn’t introduce details or themes that it doesn’t later address.  Data (an android) gives himself a beard and he wants Jordi LaForge and Deanna Troi to opine on if this makes him look like a different kind of man.  There are previous episodes with the same “I want to be a real boy” sort of theme.  You set this opening scene aside and then by the middle, Data is possessed by the spirit of a real man and everything’s gone awry.  (I’m thinking here of “The Schizoid Man,” season 2, episode 6.  Not because it’s a particularly good episode.  It’s just where I am in my binge cycle).  The structures are also fairly reliable and capitalize on the whole parable quality of the show. (Mythical place, distant in time…familiar patriarchal chain of command continually put in situations meant to test their morality and their mettle).  Each episode will be a mystery and a lesson, opening with a problem,then a search for clues, often in the form of or followed by a trial-like exhibition, and then a resolution.  Usually a just one.  Ask yourself why you’ve seen so many episodes of Law and Order when they’re pretty much all the same.  This structure.

Now my favorite.  Intelligent homage to literary forebearers.  Picard quotes Shakespeare constantly, and well.  In the same episode from above, a super scientist downloads himself into Data because he does not want to die, have the world miss out on his genius and be separated from the young blonde he’s into.  He puts his consciousness and his life’s work into something that will live forever, making of himself a document that cannot die.  The last couplet of Sonnet 18, which Picard quotes once he figures out what’s going on, ends a poem largely about aging by saying that this piece of writing will immortalize the woman to whom it’s dedicated.  “So long as men can breathe or eyes can see/ So long lives this.  And this gives life to thee.”  Something produced by man could seal a person’s memory, protect that person against death.  Oh snap, Picard.  Don’t even get me started on a well-updated Moriarty (see “Elementary, Dear Data,” season 2, episode 3).

Yes, the show is treacly at times, but it has more than its moments.  So, go to your Netflix and pat yourself on the back for your binge choices.  I invite you to make it so.