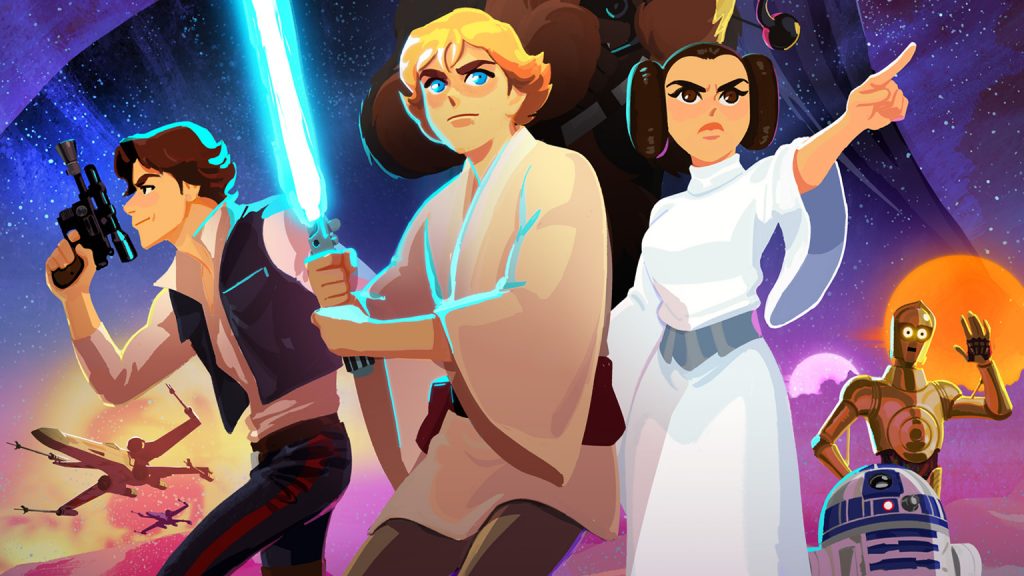 In 6th grade, Ms. Russell taught us how to read. I don’t mean the phonics, Dick and Jane kind of reading. I had made it to 12 years old with successful elementary school basics, though my penmanship stopped improving at age 10. I mean read in a way that treats the text as more than the lazy river of plot. Something that one floats through on an inner tube, a presence on the surface, drowsily suspended from falling in. Ms. Russell taught us to pay attention, that there was more going on than the story. There was the way it was being told, consequences to authorial choices, secondary implications in descriptions, subtle changes in perspective. She taught us to read literature, and she did it with the Star Wars books. 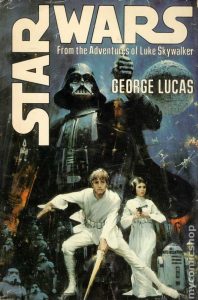 For those of you whose nerdom has never brought them in this direction of galactic fantasy, this might be your moment to say, “ah, yes, it seems the movies are based on books,” and while I do appreciate the attempt to invest the film trilogy with traditional literary merit, let’s be clear. The books are a novelization of the movies. Each came out with its corresponding film in 1977, 1980 and 1983, and though Mr. Lucas’s name graces each cover, they were in fact ghost-written (with varying degrees of ghostliness) by Alan Dean Foster, Donald F. Glut and James Kahn. (The first actually came out before the film, but the two were written concurrently). You might wonder why Ms. Russell chose these books instead of your typical Mary Shelley Frankenstein or Lois Lowry The Giver — novels which enjoyed the dignified timeline of book to screen, rather than vice versa. I’d wonder too, but my questions are quickly quelled by gratitude and geeky surrender.

I do not now remember every lesson, but I remember the first. We took turns reading aloud: “CHAPTER ONE: Bursts of laserfire streaked after the consular starship Tantive IV, which was racing for the planet Tatooine. The ship was fleeing from the Devastator, an immense Imperial Star Destroyer that was firing nearly all its turbolasers at the elusive ship. Both vessels had just entered Tatooine’s orbit when the Devastator’s lasers scored a direct hit on the Tantive IV’s primary sensor array.”

Ok, no one said it was high literature. You try to summon the interest of a room full of 6th graders without some level of lazy-river style storyline excitement generated by laser blasters and imperilled princesses. Captivated by scrambling rebels and adorable droids, we continued our reading: “‘There’ll be no escape for the princess this time,’ C-3PO said just loud enough for R2-D2 to hear. Mere minutes before the Star Destroyer attacked, the Tantive IV’s commanding officer, Captain Antilles, had issued command/control instructions to the droids, ordering them to restrict and protect all references to Leia Organa’s identity and presence onboard the Tantive IV.” 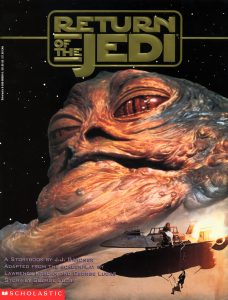 The plot was building, but here, an excited “Ah! There!” from Ms. Russell stopped our momentum. She explained our first literary term: foreshadowing. We were asked to mark the reference to Princess Leia’s capture and escape in some way — with brackets, underlining, or by painting it with one of the various highlighters our parents had sent us to school with. In my copy, there’s a crooked FS on this first page. I remember writing it. It’s even legible. We knew from the movie that the Empire would take our beloved princess, and that Han Solo and Luke Skywalker would rescue her, but “here,” Ms. Russell told us, “the text is already alluding to what will happen.” Foreshadowing. Boom. Reading would never be the same.

I still write in my books. It makes sense given my profession as literary scholar, critic, teacher, and eternal student. Reactions in the margin, underscoring, squiggly lines. A star. A star with a circle. My books are always fatter and darker when I’m done with them. A colleague of mine leaves his pristine. I’ve always been impressed by this. It’s hard for me to remember that verse when an immigrant is rejected by a life-like landscape, where I’d seen the same linking of traumatic memory to faded photographs prevalent in other works of a certain period, or on what pages an essayist equates primitive man with colonized peoples. The act of marking puts a pause in my reading, forces me to tread water for a bit and be aware of its temperature, its flow, the rocks putting ripples in it. Even just having the pencil in my hand reminds me to pay attention, to take a moment, to put this knowledge in a safe place for later. The stopping leads to other questions: how did this river even get here and where is it going? My colleague can do this without acting like some ink-filled dog marking territory. It doesn’t prevent him from stopping to question, from continuing to consider once he’s closed the book, from teaching his students how to do the same.

Literacy is more than being able to sound words out, whether struggling or sailing across the page. It’s being able to think while you read, to ask questions about origin and bias, to look for assumptions implicit in a particular representation, to contemplate the consequences of pairing certain ideas. High literacy, to me, is to be able to assign these same inquiries to your own ways of reading and writing, but at the very least, people should be taught to read critically. Whether that’s done using a literary vocabulary — like that my 6th grade teacher strove to give our class — or something else, these tools are the difference between teaching someone to swim and giving them a rubber dingy and an expired patching kit. Ms. Russell was the first of a few talented teachers to teach me how to read, and that she did so using the Star Wars trilogy only increases my gratitude. Not only did it validate and, let’s face it, increase a certain form of my nascent nerdom, but it hammered home that this type of reading should not be reserved to the supposedly high-brow. We should approach all that we read — novels, poetry, movies, cartoons, commercials, history texts, the news — with a reflecting spirit. So, thank you Ms. Russell, and may the teaching force be with me as it has been with you.