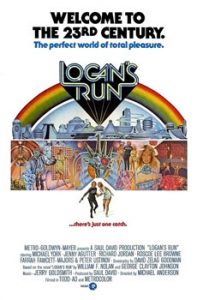 I am still trying to figure out what makes for a futurescape that we actually believe could exist.  Not just get lost in, suspend our disbelief long enough to enjoy the movie, or the show, or what have you.  What makes it so we go, “hmmm, yeah, it could totally look like this”?

Some of this comes from the spatio-temporal context. For example, anything setting itself at a distant place and time might not even conjure such questions.  If it’s “a long time ago, in a galaxy far, far away,” this introduction might cause us to debate between peeing ourselves and simply crying from the excitement, but we’re not going to be asking, “hm, I wonder if our robots will have British accents?” (God, I hope all our robots have British accents).  Another example might be the Shannara Chronicles.  Set so far into the future, it reenters the mythscape.  The presence of, you know, magic obviously helps.  No one asks themselves if the future will look like this when they’re wondering why those characters’ faces look like vaginas, whether the elves are going to get it on and how satisfying it will be based on how much of that Spike TV is allowed to show.

Some of it is production quality.  I can’t imagine that anyone watched Logan’s Run (even in the 1970s) and thought “maybe the world will look like that.”  Well, maybe if you thought that in the future everything would be mostly naked women and malls (insert one of my favorite Latin American critical references to Beatriz Sarlo’s Scene’s from Postmodern Life). But if a diorama of Las Vegas is not your vision of the future, then you didn’t buy this depiction.  Too much CGI has the same effect. One of the many reasons the new Star Wars reboots are doing better than the first round is because of the use of real sets combined with CGI.  Or, think of Avatar, Pacific Rim or any of the Transformers movies after the first one. Those of course present other obstacles, aliens principal among them. Yet, Arrival still feels possible.  Well, not the feel-good ending where we actually get along with the Chinese, but even on the alien ship, I think, “maybe.”

So, some of it is plot.  The Expanse looks plausible.  Colonizing Mars and mining asteroids while still managing to start wars and economically enslave large swathes of the population, plausible.  Definitely plausible.  But some of it is in what the actual set looks like.  Part of the reason I think the UN office belonging to Deputy Secretary Chrisjen Avasarala could be real is because it combines old and new.  The window has all the future feel of soaring glass buildings bent into physics mocking arabesques, but on the floor, there’s a Persian rug, an object whose presence points to opulence and its two thousand year history at the same time. Here, there’s a combination of traditional with things just on the cusp of new, yet still recognizable.  There’s a sense of continuity between past (Persian rug), present (an institution like the UN), and future (buildings that are one step past Dubai or Shanghai).

Very near futurescapes do this well.  Her basically looks like an Apple ad. (The isolation and ennui of modern life lived in constant contact with operating systems are also fairly familiar).  Logan is convincing, but mostly because it looks almost exactly the same as now with some self-driving 18-wheel trucks. 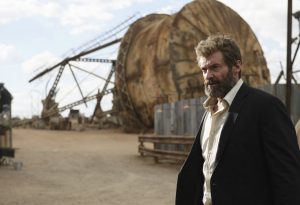 The same principle is at work when we see the decrepit or decaying with the new.  Think of the fallen water tower that Professor X lives in in Logan or some of the street scenes in Minority Report that show dead and rusted out versions of cars from the period in which the movie was actually shot (early 2000s) interspersed with high-speed, sideways highways.  The former lend credibility to the latter even though these highways do not comply with the need for backdrops that don’t look like they were rendered in 3DS Max.  When the decrepit remains of our time showing up in these movies are iconic, this can work to even better effect (though, not always, see, again, Shannara Chronicles).  The Statue of Liberty in Planet of the Apes (the 1968 original, obviously) is a powerful, and somewhat harrowing, example.

Minority Report brings me to my last point, as I’ve heard a lot of discussion about its interfaces.  (This is mentioned in a great episode of 99% Invisible).  Before the future came to fruition in full-force love of touch screens, we wondered how we would interact with ever-advancing technology.  Minority Report seems crafted with quite a lot of attention to how humans would actually live in the environments being depicted, and while Tom Cruise’s crime fighting begins with the rather romantic yet unreasonable notion that life in front of a computer screen will one day look like conducting a symphony, we sort of buy this depiction.  This is because we perceive the detailed consideration of the points of contact between human and computer.  The people who worked on this film clearly thought about what it would be like to inhabit this space, how data would be transferred, accessed and saved.  Even the traces different products would bear of their manufacturers.

Perhaps it’s merely a question of well-assembled art.  This means quality (which can simply be a matter of consistent production design) but also thorough but grounded imagination.  Future scenarios that tend to have success and longevity reflect something about now.  Star Trek and Battlestar Galactica (the new one, not the chintzy 1970s one, which is frankly, unwatchable) did so well because they’re also about the period in which they were made.  Now must also connect to the past.  In our day to day lives, we see the past in our present; we live in it: buildings constructed a long time ago, furniture design that was popular decades before pops up again (nothing, not even my mother, will get me to part with my mid-century modern).  So, continuity is a large part of a plausible near future.  The other thing to keep in mind is that we (theoretically? hopefully?) will be in that near future.  If in a film maker’s orgiastic love of pretty design, he or she neglects to imagine what it would actually be like to physically interact with that environment, then we won’t buy it.  Perhaps this will change as we  inhabit virtual worlds more and more, but I’d like to think that we’d like to think, we’ll keep one foot on the ground.